Together with the Moscow Art Theatre School 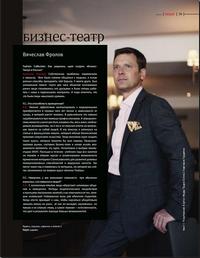 Fashion Collection: How did the idea to create a “Business-Theatre ” in Russia?

Vyacheslav Frolov:  My own problems pushed to the plan. It was hard to communicate with people and I was looking for different ways to overcome this barrier. My friend was unique talent: through two hours of communication with unknown before people they became his friends and were ready to work with us and sign contracts. And it should be noted that these people were “high level”.
FC: This ability is innate?
VF: The ability to effectively communicate with others acquired in the first five years of life, depending on the environment in which child grow. Later, these skills brings ever with the help of professionals.
To a certain point, I already had, apparently, all the experience necessary head, but I have not received an answer to the question of how to lead people. In his quest, I came across an article about a French clown, who taught businessmen methods of clown art. Then came the idea of creating courses that would help me most.

Analyzed the market, got the business plan and began looking for opportunities to implement this idea. Intuitively, I chose the Moscow Art Theatre School. Visited school during the year, all classes in the first and second years of study and analyzed the possibility of using techniques of Stanislavsky for developing business communication skills and leadership qualities. So almost a year later appeared the method by which now we teach the first course of “Business-Theater”.
FC: Perhaps you are having difficulty in teaching adults were held?
VF: With the experiences of life people grows stamps of behavior and communication. Methods of pedagogical influence and principles of our classes are different from those used by college theater for student learning. When someone comes to us to learn how to convincingly “hang noodles on the ears,” he goes away, having learned not only this, but most importantly – natural, which gives much more possibilities.